Painter. He studied at the painting school of Ödön Márffy between 1950-1954. Masters: István Varga Ilosvai, Emil Gádor, Menyhért Tóth. Lives in Budapest. Secretary General of the Buda Artists’ Group between 1990-1998. He worked at the artists’ colony in Tokaj and Telkibánya. He has appeared in several solo and group exhibitions in Hungary. He had a solo exhibition in 1981 at the Art Gallery. He is a regular at the National Watercolor Biennale. Awards: 1st prize in the competition announced for the 100th anniversary of the unification of Pest-Buda, Ilosvai Varga István Prize, 1996. His works can be found in the public collection, among others, in the Károly Ferenczy Museum in Szentendre.

Miklós Németh was a Hungarian painter. Highly influenced by German Expressionism, Németh is notable for his important contributions to the Hungarian Modernist movement. His paintings are gestural and organic while ranging between the representational and abstract, often depicting landscapes, nudes, and portraiture. His distinctly bright palette often included starkly outlined forms and graphic, linear compositions. Rejecting the popular style of Socialist Realism, Németh was instead inspired by nature and labeled himself the “Painter of the Volcano,” due to his attraction to the visual tactility of cooling lava which inspired his handling of paint. Born in Budapest, Hungary in 1934, Németh died in 2012.

20th Century Hungarian art is seen internationally to be greatly influenced by representatives of Abstract and Constructivist trends. The painter Laszlo Moholy-Nagy was a teacher, together with Wassily Kandinsky and Paul Klee, at the famous Bauhaus in Weimar. It was precisely the history of art after 1945 that pushed the early Constructivist tradition of Hungary very much into the foreground. It was this epoch that was deemed as the forerunner of Concrete and Minimalist art after 1945.

There is another trend of art in Hungary that is equally as dominant and appears to be contrary to the Constructive trends. In 2003, I stumbled across this trend while working on the exhibition, “Zeit des Aufbruchs. Budapest und Wien zwischen Historismus und Avantgarde“ – “Times of Change. Budapest and Vienna between Historism and Avant-garde”. This exhibition was organised by the Hungarian National Gallery in the Museum of Fine Arts in Budapest and Palais Harrach, in Vienna, and also in Budapest in the Hungarian National Gallery in 2004.

I was responsible for curating the Avant-garde after 1900 section, and was able to depend on the valued cooperation of Dr Andreas Zwickl, Curator of the Hungarian National Gallery. Together, we moved the exhibition into the foreground where the exhibition of the New Art Group in Müveszhaz, the Budapest Künstlerhaus, had taken place in 1912. Egon Schiele and his colleagues, from the New Art Group, but also Oskar Kokoschka, exhibited there together, for the one and only time, with Arnold Schönberg.

As well, reference has to be made to the Avant-garde group “Nyolcak” (The Eight) which was founded in 1910. Members included Ödön Marffy and Lajos Tihanyi.

Finally, a mention has to go to the Constructivists that included Bela Uitz and Lajos Kassak, who published the legendary art magazine “MA” from 1920 to 1925.

All of these artists were greatly influenced by the academies from Munich to Paris but strangely enough hardly by the Viennese academy. There was no art academy in Budapest at the time and, surprisingly, above all, the French Fauvism had a strong influence on the Budapest artists. Artists like Josef Rippl-Ronay, Ödön Marffy, Lagos Tihanyi and Istvan Csok each lived in Paris for a long time and even before 1914 they immediately liked Fauvism and made it familiar in Hungary.

Miklós Németh is also a representative of the Fauvist art trend. Born in Budapest, in 1934, he hailed from a bourgeois background. His father worked as a photo chemist at the State Cartography Institute in Budapest. His parents lived in a villa in the noble suburb of Pasaret where Miklós Németh grew up.

His whole life the artist suffered from impaired vision as a result of an injury at birth. This poses the insignificant question of what impact this has on the profession of an artist where 20-20 vision is essential. It is possible it could have an effect on the style of the paintings. It is reckoned that El Greco’s typical distorted perspectives arose from an eye suffering. The painter, Ernst Fuchs, suffered a childhood trauma as a result of a splinter of wood going into his right eye. Later he, Fuchs, painted self-portraits again and again where only one eye is completed and the other is left free. It is possible that Miklós Németh’s visual impairment also had an impact on his style.

From 1950 to 1954 Miklós Németh attended Ödön Marffy’s Art School. Ödön Marffy attended the Julian Academy in Paris in 1905. Typical for the group of painters from the Julian Academy are the strong, immense, modern colours. Marffy’s effect on the Paris scene coincided exactly with the founding of the French Fauvism. Since that time, and also after his return to Hungary in 1907, Marffy kept a strong affinity to Fauvism and to Cézanne’s art. Among other things, he became a member of the Avant-garde group “Nyolcak” (The Eight) which was founded in 1910. In 1950 he set up an art school in Budapest. However, the development of art after 1945 in Hungary was not independent of the political development. In 1958, two years after the Hungarian uprising in 1956, Marffy’s art school was banned by the state.

Characteristic for Miklós Németh is his spontaneous way of working. He doesn’t do any preliminary studies, instead, he works on location, quasi painting his motifs as he sees them in front of him. Village streets, suburbs, landscapes with figures can be found again and again in his works. Other themes are the world of the circus and the naked female. Miklós Németh counts as one of those painters who has paid homage to the female body since its existence, and he is especially receptive to the sensual elements of this outstanding topos of the history of art.

His style has continually carried on the tradition of Expressionism and Fauvism. To him it is all about spontaneous painting. The motifs can mostly be recognised even if they are simplified. They are reduced to the essentials. It all comes down to reproducing the instantaneous artist’s impression that the motif has on the artist and the immediateness of the emotion. Emotion and suggestion are communicated, above all, through colour. The colours are, thereby, very loud, strong and effective. The artist often puts the colours on the palette without mixing them. This can be especially seen in earlier works, around 1969, where the shapes are always surrounded by black contours. In doing so, the contours produce a strong structure and clarity in the creation.

Many representations, particularly the landscape motifs, clearly remind one of the Paris Fauvism, for example, of the 1905 works of Maurice Vlaminck and André Derain. Miklós Németh’s intentional simplification of his figural representations reminds one of The German Brücke Artists (The German Bridge Artists), Ernst Ludwig Kirchner, Max Pechstein or Karl Schmidt-Rottluff. Also the motifs, the lapidary landscapes with figures, are greatly reminiscent of the motifs of the German Expressionists. The pastose colour application reminds one of Emil Nolde’s works. By using the dark contours, Miklós Németh comes close to the painter, George Rouault, and his circus representations also connect them.

This constant adherence to an expressive, strong-coloured, gestural way of painting is also very characteristic for 20th century Austrian painting. The main representatives of this gestural, pastose colour application, at the beginning of the early Avant-garde, are Richard Gerstl, Oskar Kokoschka, Anton Kolig, Anton Faistauer and Herbert Boeckl. These works were produced before, and around, the First World War. Also in the 1920s (nineteen twenties) and 1930s (nineteen thirties) this tradition of expressive way of painting continued. Think of Ernst Huber, Josef Dobrowsky, Sergius Pauser, Karl Szyszkowitz or Jean Egger’s landscapes which originated around 1930. Franz von Zülow’s works also appear to be interesting as their deliberate simplicity and archaic colour effect show a relationship to Miklós Németh’s paintings.

Only in the 1980s did the figural expressive way of painting become internationally interesting again. In Italy there was the Transavantguardia, in Germany the Neo-Expressionism with Rainer Fetting, Markus Lüpertz and Georg Baselitz. In Austria, the “Neuen Wilden” Group dominated, which included painters like Hubert Schmalix, Sigfried Anzinger, Alois Mosbacher, Herbert Brandl, Alfred Klinkan, Hubert Scheibl, Jürgen Messensee and Alfred Kornberger. Typical for the representation of this trend is a free, impartial dealing with tradition. One is not afraid to use the classic moderns as role models, and, as it were, quote Expressionism and Fauvism.

The new interest for figural expressive painting since the 1980s excuses, quasi, the unbroken tradition that Miklós Németh in Hungary, and painters like, Karl Stark, in Austria, kept alive.

Miklós Németh worked with broad brushes on canvas and emptied one paint pot after the other. For him, the painting is only finished when the paint pot is empty. Each painting is completed in a single continuous process.

Today’s Expressionists do not need to justify why they are carrying on a tradition which was violently interrupted by the Second World War. In view of the present types of The Pluralism of Style it is not important to put the order of styles in the foreground, but rather the artists’ authentic way of communicating. Miklós Németh’s works are, without a doubt, authentic, true and real. They originate from the painter’s desire to communicate and the artist’s addiction. Pál Deim, describes Miklós Németh’s paintings as “Explosions of Fantasy”. Miklós Németh allows himself to be inspired by “the colours of cooling lava from a volcanic eruption”. Miklós Németh is “The Painter of the Volcano”.

The first time I came in contact with Miklós Németh’s art in 1996 I, as a long-time collector of Expressionist art, was instantly fascinated by the power of expression and impulsiveness of these paintings.

A fascination that has never let me go!

This comparatively young art reminds me of the German, as well as, the Austrian Expressionists. Always open to new things, I consequently took Miklós Németh’s post-expressive paintings immediately into my collection, and, I find reassurance therein, that his works are receiving more public acclaim and recognition through more and more publications and exhibitions.The spontaneity with which the artist reduces his motifs to the essentials speaks to the beholder through their strikingly strong colours, thus making access to this art, not just for art connoisseurs, simple, as well as exciting.

Special thanks go to Mr Jan Stanislaw Witkiewicz, to the Sztuki Wspolczesnej Winda Gallery, as well as, to the Hungarian Embassy under whose patronage this exhibition takes place.

My enthusiasm for this exceptional painter has continued until today and I am sure it will be shared by many others through this exhibition.

1958: Married  Ilona Benko, painter, with whom he has three children

Since 1981: Incorporated artist of the National Union for Hungarian Artists 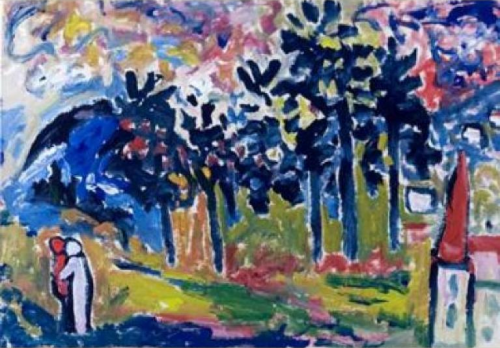 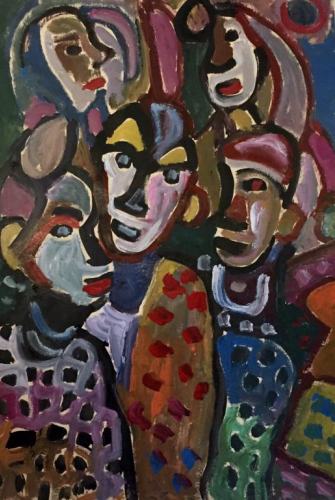 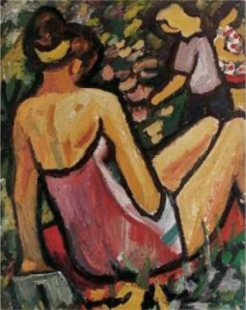 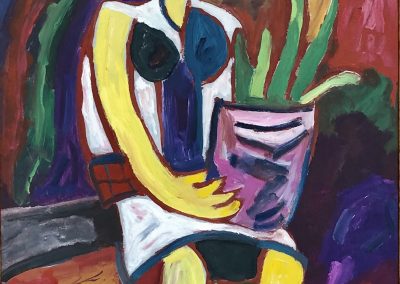 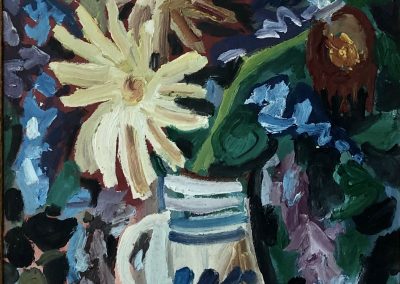 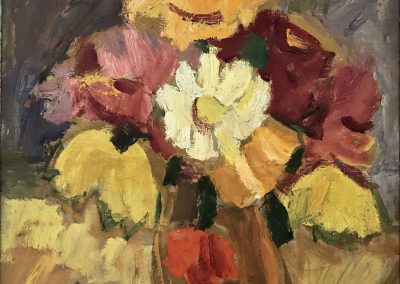 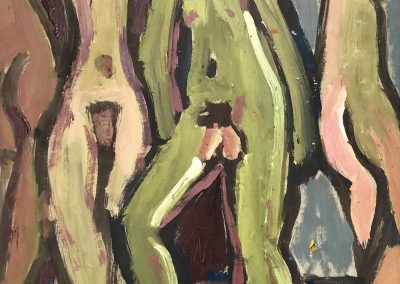 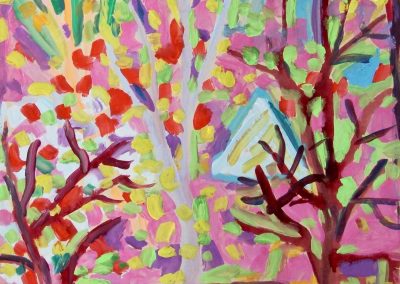 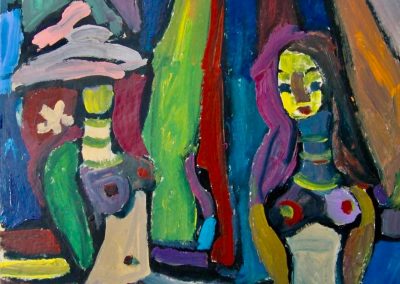 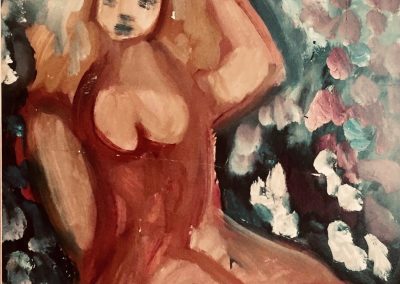 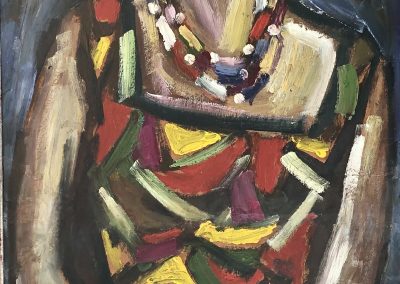 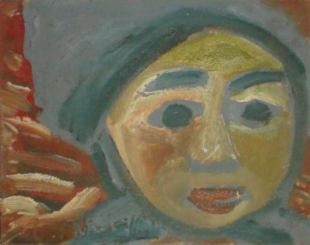 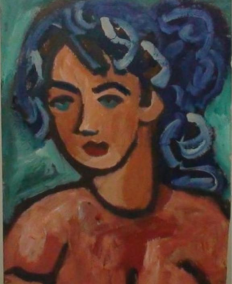 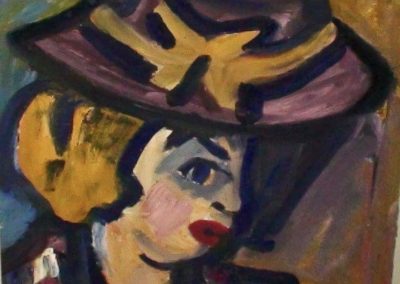 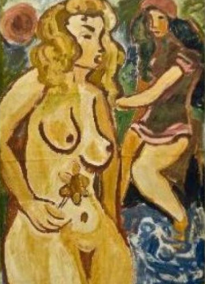 Girl with a Flower 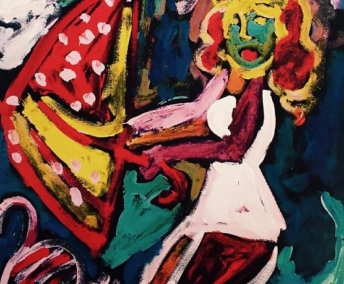 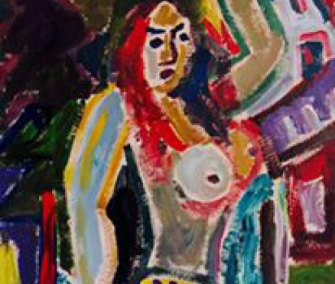 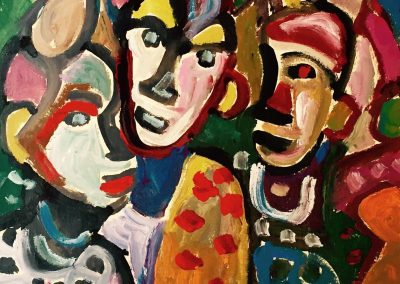 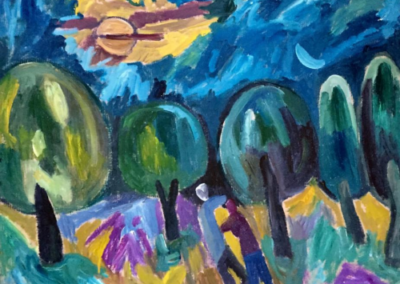 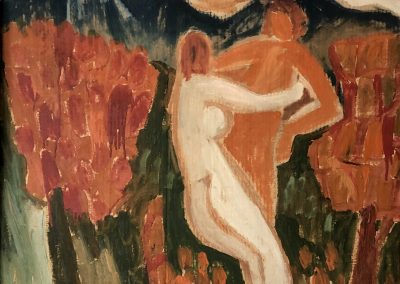 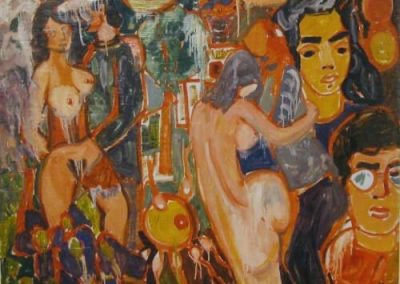 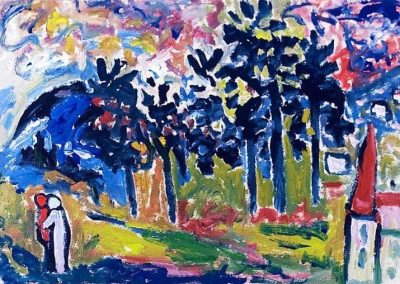 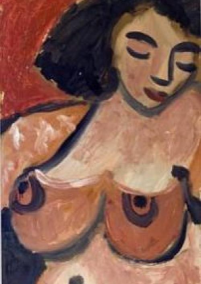 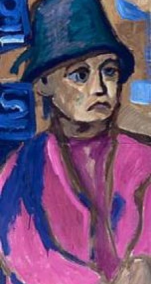 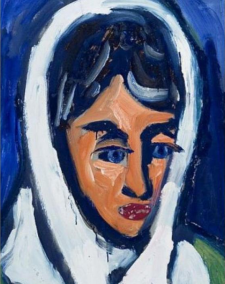