1930-1935: College of Fine Arts, masters: János Vaszary, István Réti, László Kandó. He is a regular member of the Tokaj artists’ colony and the Baja group of painters, a regular participant in the Great Plain Exhibitions, and one of the founders of the ship’s creative camp. 1973: István Nagy Prize; 1974: Silver Degree of the Order of Merit of the Hungarian People’s Republic; 1976: Worthy artist of the Hungarian People’s Republic; 1990: Posthumous Kossuth Prize. Study trips: 1967: Czechoslovakia, on the occasion of the exhibition “Naive” in Bratislava; 1975: Canary Islands; 1977: Cagnes-sur-Mer [International Painting Festival]. He spent his childhood in Miske. After completing his studies, he moved back here. In his profession, he lived in isolation, alone, from 1945 to 1958, working in agriculture and painting the room, and although he did not give up painting, he did not present his work until his 1964 exhibition, except for his 1941 exhibition. After three decades of obscurity, it was then that his art was recognized. From 1974, the Bács-Kiskun County Council signed a contract for his oeuvre. His painting was conceived in the spirit of the village, he found his real home in nature: he combined the world of thinking and feeling of the village man with the experience of his imagination, the consciousness of the artist, the means of modern art. His paintings, which cannot be connected to schools, ignored the rules of the craft in force, and show a kinship with the full-fledged cosmic worldview and vision of naive painters and primitive art. An instinctive creator who pays attention to the mission of the work; his art, from detailed depiction of natural reality, stylization to simplification of forms to abstraction. His ideal of painting is the rounded form that embraces completeness, the painting with an instinctive and moral charge.

The period from 1930 to 1945 is influenced by the allegorical representation. As a college, in his cubist experiments, he indicates their geometric division according to the internal order of the forms. His serpentine line diagrams and golden colors dominate in his drawing, decorative, calligraphic design. His early works are characterized by the folkloristic ornaments around Kalocsa, the stylized culture of the surreal fantasy and dream world, and the Art Nouveau outline. The themes of his narrative painting come from the life of the village, from the everyday activities: the village-peasant environment, the naive fairytale world, the unity of opposites, the struggle of good and evil, the cycle of life. It gradually abandons the possible details of the human body for a more universal order of form. In 1945 he also painted a Soviet soldier. His repeatedly revised portrait of Lenin — one of his most spirited, enigmatic works — was eventually titled The Wise / Philosopher (1977). The magical, metaphysical pictograms and “sentence tapes” that accompany his oeuvre already appear in his paintings (Költözködés, 1938; Boldogasszony, 1939; The Good Blacksmith, 1942). In the period up to 1958, its forms are more closely tied to the visual elements of reality; instead of a surrealist representation of spontaneous fairy-tale-like, the figures, shaped by color, come to the fore, in the shaping of which type-making leads. In his expressive realist, plastic and serene images, he stylizes fate and human life: planting man, field scenes, repetitive movements (Goat Flock, Fisherman, Cabbage Pickers, Eyewitnesses, Adults, Threshing). A common motif is the good shepherd with the lamb. The shapes are closely aligned with each other, forming dynamic rhythm blocks (Harmonikás, 1949; Planters, 1952). The basic tone of its color scale at this time is blue. It unfolds in the 1950s as a continuation of his expressive psychics of his portrait painting (Youth Self-Portrait, 1934-35). On more contingent, distorted head shapes than the regular ones, the symbolic moments intensify, providing a universal definition of man (Ősöm, 1950). Preparatory for the mature style of his expressive realist headline. Its figures are mostly grotesque, damaged-eyed, bird-headed, evoking the beliefs, superstitions and ancient fears of the village. His ironic conception of man is indicated by the fact that he is often in the picture himself: his shattered body-face – he has attacked one of the eyes of tuberculosis; as a painter, half of her legs froze, so she had to be amputated – her outer marks can also be found on her figures. In the mythological or rejoicing era up to 1974, life-like details are replaced by symbolic, concise representations. It gradually abandons the use of perspective: the mode of representation is frontal, reduced to two dimensions, the motifs appear in a plane, placed side by side. Image themes include animals endowed with human qualities (lambs with human faces, human fish, also humanizes trees), still lifes, and one or two figurative works (Peasants, 1971; Africa, 1972). It shows the world, living beings, and inanimate objects in organic unity; in addition to a healthy joy of life and cheering, it also indicates fear and drama (Danger, 1972). The so-called “White” era is the synthesis of oeuvre, language renewal of painting. His lines were reduced to more and more concise, signified, condensed toward a single white color. His one-line drawings are masterpieces of formal abstraction. 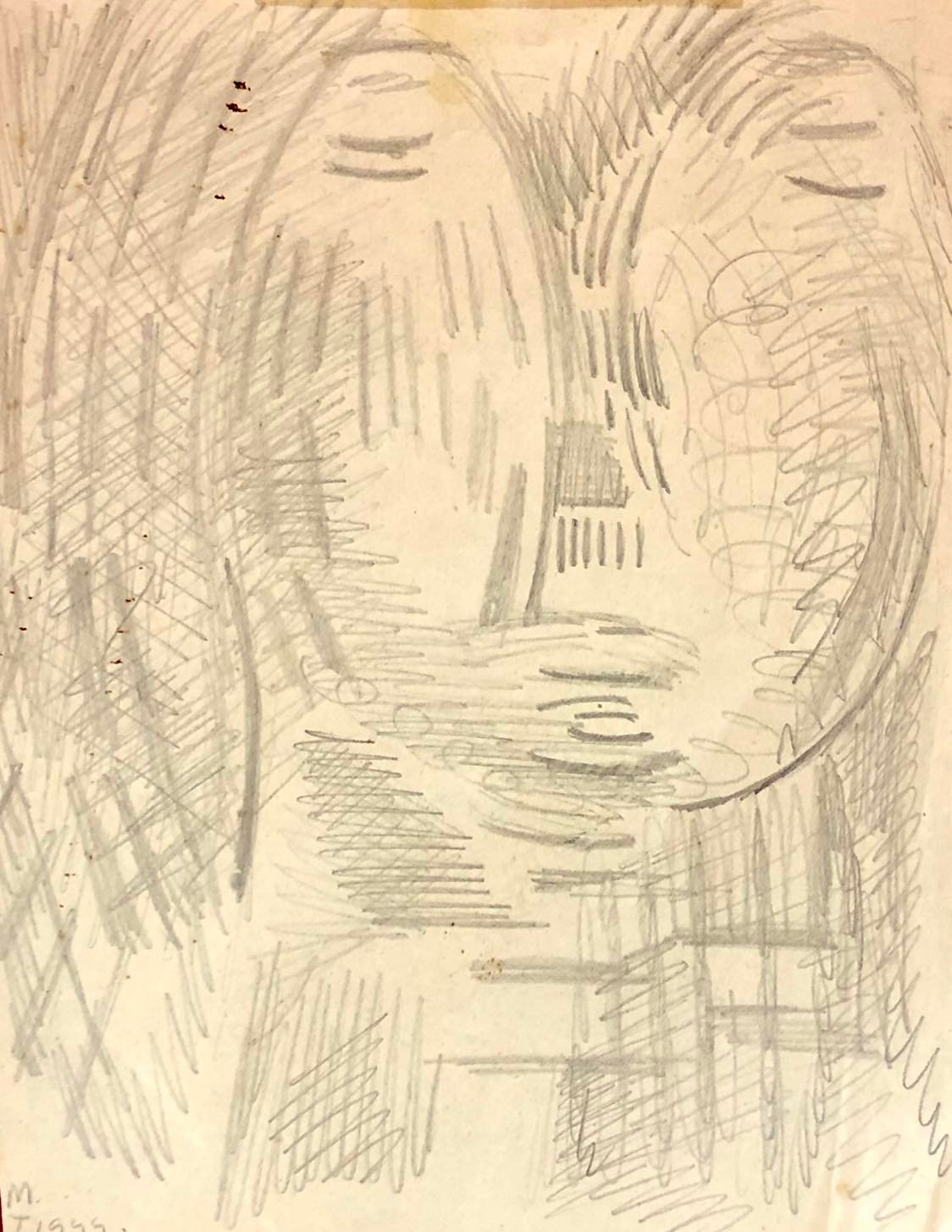 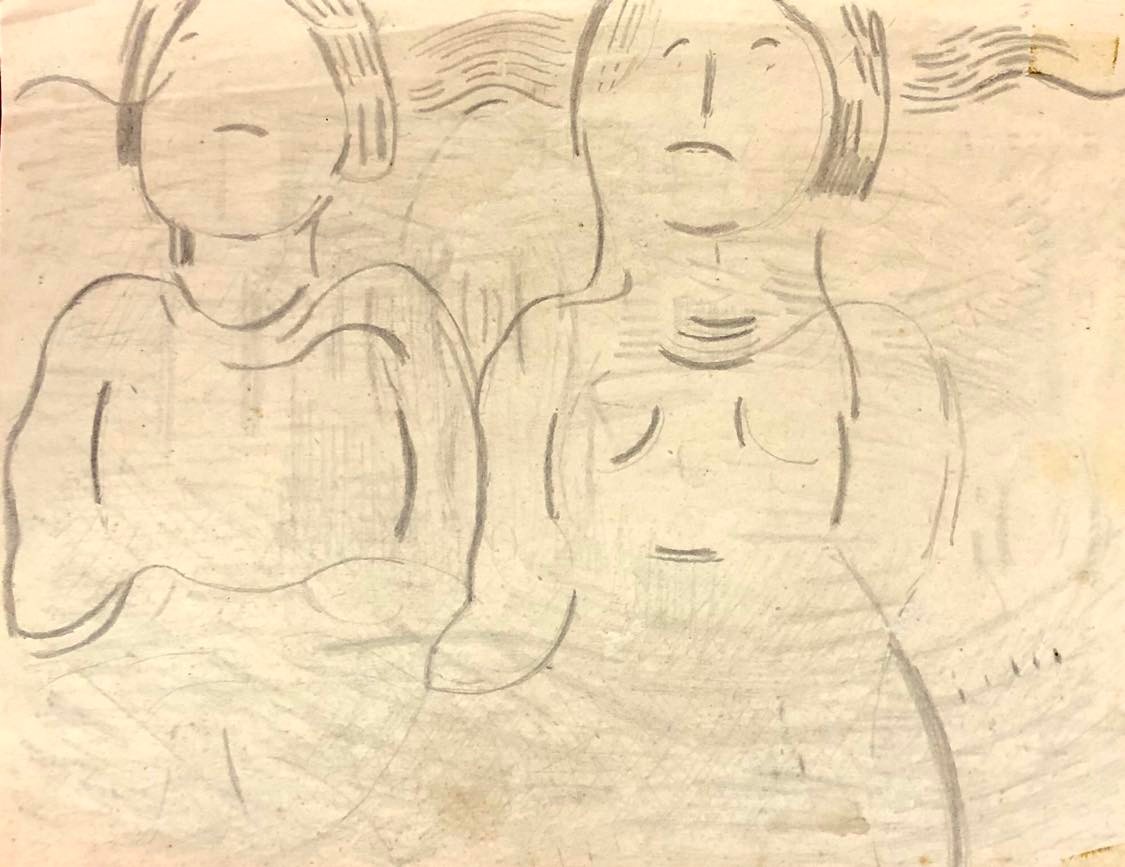 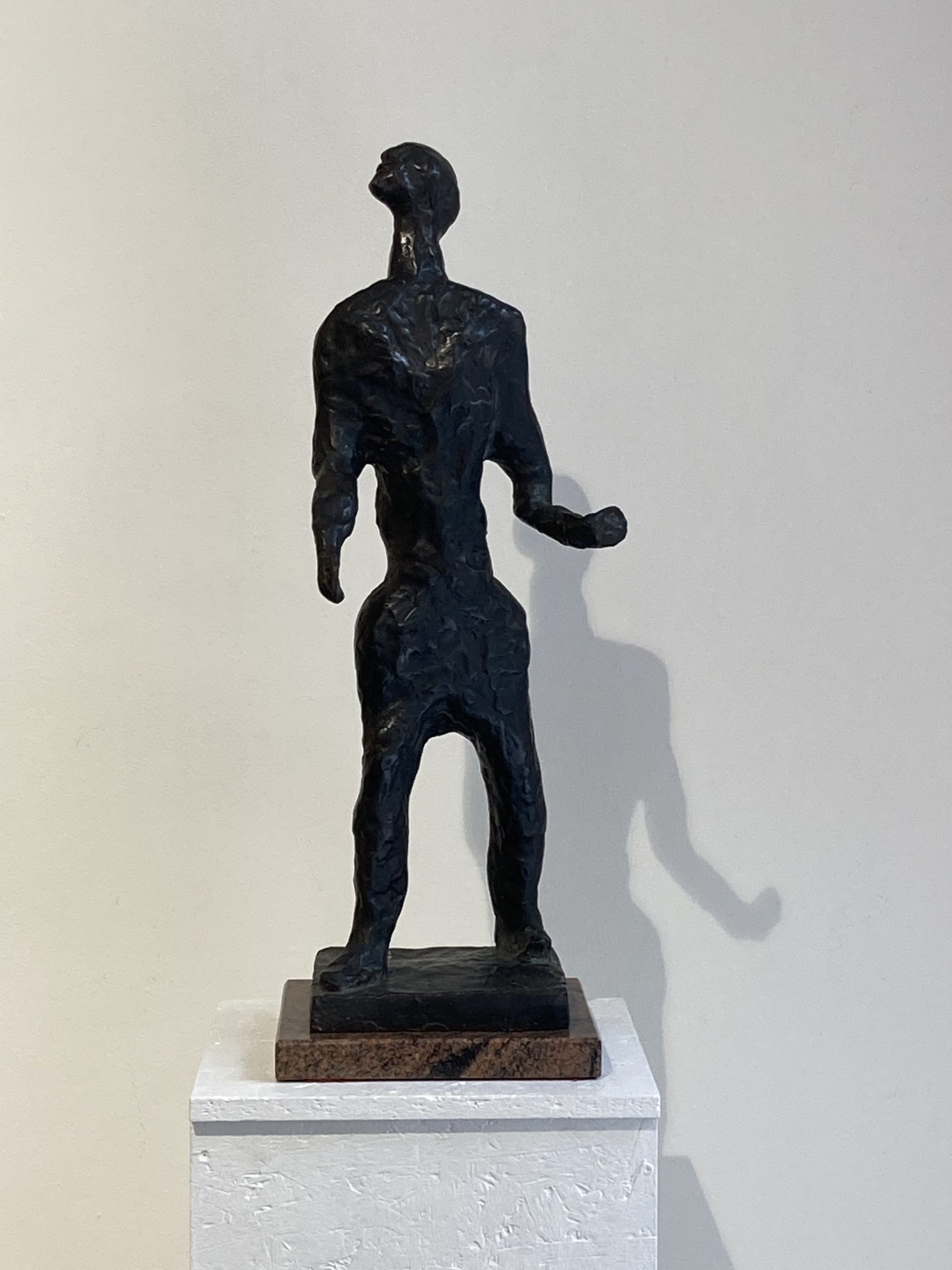 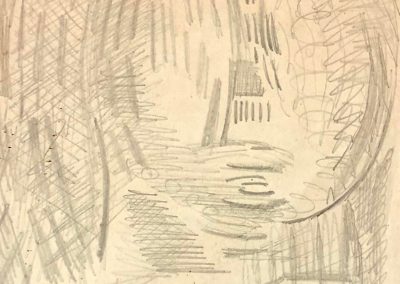 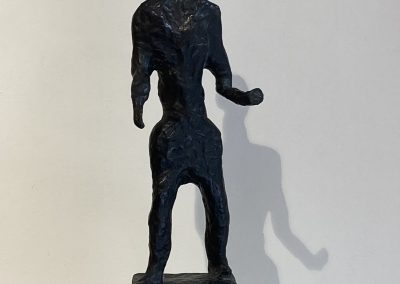