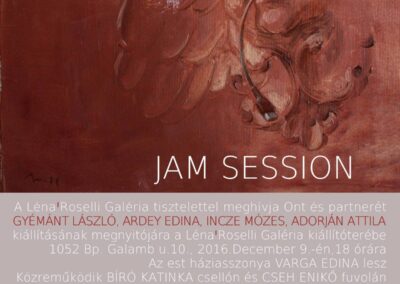 The hostess of the evening will be Edina Varga, with the participation of Enikő Cseh, flute and cellist Katinka Bíró.

A jam session is a musical act where musicians gather and play (or “jam”) without extensive preparation or predefined arrangements.
The origin of the term jam in this context can be traced back to the 1920s. According to the Online Dictionary of Etymology, the term originally appeared ca. 1929, referring to a “short, free improvised passage performed by the whole band”. The derivation of this usage is obscure, but like other novel terms that came into English through jazz music — such as the terms “hip”, “hep” and “hepcat” — it is possible that it ultimately derives from the West African Wolof language.
The word ‘jam’ can be more loosely used to refer to any particularly inspired or improvisational part of a musical performance, especially in rock and jazz music. Jam sessions, however, are generally for the benefit of the performers and not part of a public performance.
Jam sessions are often used to develop new material, find suitable arrangements, or simply as a social gathering and communal practice session. Jam sessions may be based upon existing songs or forms, may be loosely based on an agreed chord progression or chart suggested by one participant, or may be wholly improvisational. Jam sessions can range from very loose gatherings of amateurs to sophisticated improvised recording sessions intended to be edited and released to the public.

Other artists, such as painters, often require each other to escape the privacy of the studio or it is as if they can choose from the menu of a restaurant to their liking what they just want, as opposed to the monotony of mass catering. We chose the title to be “Jam Session” because at our exhibition we would like to combine the art and music in harmony.

Take a look at the eventation to the event: https://lenaroselligallery.com/project_category/jam-session/