Information about the recent exhibition of artist, Joseph Sassoon Semah 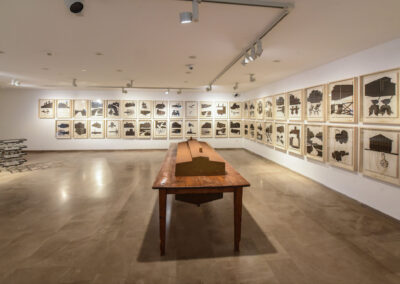 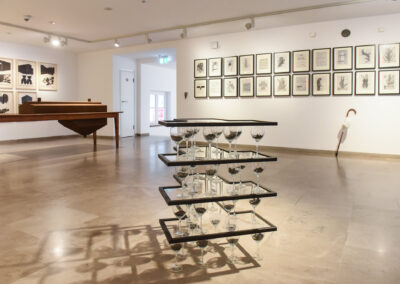 Information about the recent exhibition of Joseph Sassoon Semah | Gerhard Marcks Haus, Bremen Germany, 24 February 2021 – June 2021.
Joseph Sassoon Semah ‘s research: tracing Martin Heidegger’s hut and Paul Celan’s clouds.
…Bear in mind, transparency was no longer possible there. After all, PaRDeS on display is simply what the poet wants but cannot have.
It does however correspond to the fearsome intersections between the narratives of those two men, and the course of reconciliation with the artist’s promise.
In relation to each other, Martin Heidegger and Paul (Antschel) Celan are enigmatic; both are writers and their blackness is justification,
is nothing but a function of promise. And yet, as a poet whose customer is a philosopher, Paul Celan has power over Heidegger, Poet-power, and the power of sacrifice’s body over the philosopher’s desire. Then again, the artist only chance of self-realization is to reverse the roles of Poet and Philosopher.
To begin with, and beneath the camouflage of writing, it is important to remember the famous meeting between the poet and the philosopher. Recall, the encounter took place at Martin Heidegger’s hut in the black forest, above the village of Todtnauberg, and there, after a lengthy walk among the flowers and the trees, the poet wrote one singular line in the philosopher’s guest book: “Ins Huttenbuch, mit dem Blick auf den Brunnenstern, mit einer Hoffnung auf ein kommendes Wort im Herzen. Am 25. Juli 1967/ Paul Celan”. (In the cabin book, with a view of the star on the well, in the hope of a coming word in the heart. July 25, 1967/ Paul Celan).
Learn more: https://lenaroselligallery.com/information-about-artist-joseph-sassoon-semah/
Learn more: https://www.kunstmuseum.nl/en/exhibitions/joseph-sassoon-semah