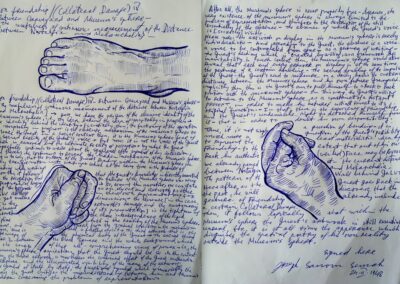 Sassoon Semah was born in Baghdad in 1948 as one of the last descendants in a line of Babylonian Jews. Their exile goes back to 600 BC. Sassoon Semah is the grandson of Hacham Sassoon Kadoori, a legendary, liberal chief rabbi who preached tolerance between Judaism, Christianity and Islam. After Israel gained independence in 1948, many of the Babylonian Jews had to leave the then cosmopolitan, culturally very diverse city of Baghdad. Between 1950 and 1952 120,000 to 130,000 Jews emigrated – which marked the end of a cultural history more than 2,500 years old. In 1950, Sassoon Semah and his parents were “moved” to Israel, where his second exile (“GaLUT” in Hebrew) began. He grew up in Ramat Gan, near Tel Aviv, and later studied electrical engineering and philosophy at the university in Tel Aviv. His grandfather remained in Baghdad, where he died in 1971. Nowadays, almost seventy years and several wars – including the Gulf War in 1991 – later, there is hardly anything in Baghdad left as a reminder of the once flourishing culture of the Babylonian Jews. After traumatic experiences during the Six Day War (1967) and the Yom Kippur War (1973), Joseph Sassoon Semah decided in 1975 to leave Israel. During this self-chosen third exile, he emigrated to Europe. After staying in London, Paris and Berlin, Sassoon Semah settled in Amsterdam in 1981, where he has lived and worked ever since.

The artist characterizes his own work as the legacy of his grandfather’s liberal ideas. Starting in the mid-seventies, at a time when the art world had completely different preoccupations, Sassoon Semah developed a visual investigation in which memory and the concept of tolerance are central. The interconnectedness of Judaism, Christianity and Islam always forms the starting point of his work – without losing sight of the problematic aspects of that interdependence. Sassoon Semah’s work thus fits into an age-old liberal, (Jewish) humanistic intellectual tradition that extends from Baruch de Spinoza to Emmanuel Levinas, Martin Buber, Isaiah Berlin and the Frankfurt School. His visual oeuvre could be interpreted as a Warburgian Mnemosyne atlas: a corpus that maintains the memory of ideas, cultural histories, historical sources and events that would otherwise fall into oblivion. His work has a strong interdisciplinary character – it extends from etymology to literary history, from religion to philosophy, and from politics to art history. Soon after arrival in Amsterdam, Sassoon Semah was co-founder and organizer of the Amsterdam artists’ initiative Makkom (1983-1988), which encouraged interdisciplinary research in the arts. As an organizer and curator of large-scale, research-oriented exhibitions and manifestations, he has since continued to play an important role in the art world – a role that is just as important as his visual work.

Sassoon Semah frequently stated that his artworks relate to texts as footnotes. Part of his ethically driven artistic work consists of critically reading and (re) interpreting the work of other, mainly modernist artists. “I analyze, in an etymological sense, the art of the West and confront it with the Hebrew language in a semantic sense,” said the artist. In this way, Sassoon Semah has focused on the position of the Other in the work of Albrecht Dürer, Marcel Duchamp, Piet Mondriaan, Kasimir Malevich, El Lissitzky, Barnett Newman and Joseph Beuys, among others. He also devoted a group of drawings, paintings and sculptures to the two-day meeting in 1967 between the German philosopher Martin Heidegger, who joined the Nazis in 1933, and poet and Holocaust survivor Paul Celan.