Imre Bukta (Mezőszemere, July 20, 1952 -) Munkály Munkácsy Prize-winning Hungarian artist. Between 1993 and 2012 he was a member of the Fine Arts Department of the Hungarian Academy of Arts, and from 2013 he was a corresponding member.

He graduated in Eger in 1970 and also passed the professional exam. Self-taught. He worked on a state farm while attending drawing schools. His masters were Jenő Kishonty, János Pető and János Pataki. Between 1970 and 1971, he organized an art colony with Tándor Bernáth (y) in Tiszafüred, thus committing himself to art. Between 1971 and 1973 he was a soldier and then a corporate interior designer in Eger and Lenin.

In 1977, he experimented with plastics at the Tisza Chemical Plant, where he met the artists of the Lajos Vajda Studio. During his creative period, he graduated from Pécs and then habilitated at the Moholy-Nagy University of Arts. His exhibition in Budapest attracted attention in 1978, and since then he has been continuously present at domestic and foreign exhibitions. He worked at various art colonies in Zalaegerszeg (1979); Makón and Csongrád (1979-1984); In Dombóvár (1986-1988). From 1986 to 1989 she was a member of the New Lady Courier Revue, and from 1980 to 1994 she was a member of the Szentendre Graphic Workshop. Numerous domestic and foreign publications have been published about his works and exhibitions. He is currently teaching at the Károly Eszterházy College in Eger at the Department of Fine Arts, the founder of the Mezőszemere Civil Association. Art collector and photographer Miklós Nagy made pictures of the artist. 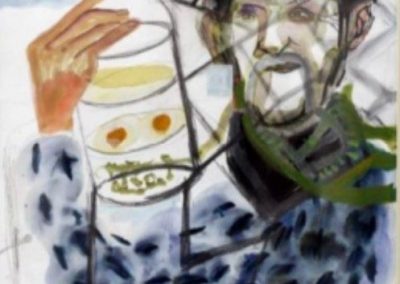 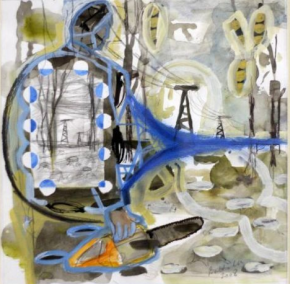 Man with a Saw