The Hungarian equivalents to the expression „PSEUDO" are: false, non-real, real-like connected with sculpture this term has been applied fist to Pauer Gyula's works made in 1970. It indicates one of the most conspicuous features of sculpture and through it a new aspect of that. The forms of the PSEUDO sculpture do not appear to be what they really are. The PSEUDO sculpture does not tell about plastic art but about the situation of plastic art. One of the historical preliminaries of PSEUDO is MINIMAL ART. The MINIMAL sculpture is a kind of plastic art reduced to a few simple geometric forms; the shocking effect of witch manifests itself just in its pureness, avoiding consciously any ornamental motif or sentimentalism. It also has been preceded by the illusionistic technique of OP ART. The pure form in OP ART is dissolved in the endless variety of motion. But OP ART has remained in the plane as decorative illusionism. In front of the pure a forms of the MINIMAL sculpture PSEUDO creates the surface of a non-real sculpture — in fact one gets the image of two sculptures simultaneously. This effect is achieved by projecting the picture of a less simple object upon the surface of the given simple geometrical forms. This is made by the way of photo-process — on the surface of the sculpture there appears the surface of another sculpture. So the PSEUDO sculpture visualizes reality & illusion, substantial & non-substantial on the same object at the same time. The exact forms are perceivable but perception is always interfered with by the illusionist's image. At last the PSEUDO includes the following problems:
1. The existence of the form
2. The absence of the form
3. The PSEUDO-like attitude, the manipulatedness of the object.
These themes step over the substantial space of sculpture and require functional interpretation. We consider the following interpretation as proper: The PSEUDO-character means the sculpture's being plastically manipulated. Manipulatedness of the PSEUDO sculpture both in its form and in its technique is only a symbol of the existential manipuletedness of plastic art / and arts in general/. In the last third of the 20th century modern art has got into the whirl of social manipulations by following the way of consumer's goods. Of course, the PSEUDO cannot tell about the manipulatedness of the social relations, circulation, advertising-system and functions of products of art, because the PSEUDO sculpture is not a historical treatise, not a paper of sociology and neither an illustrated popular lecture. The PSEUDO sculpture is a sculpture representing itself as a manipulated sculpture and thus proves the existence of manipulated existence. PSEUDO reveals itself as a false image or at least as a complex object giving also a false image.
But PSEUDO does not pledge itself merely to the act of exposure. The PSEUDO sculpture watchfully sets new surfaces upon the surfaces of simple and exact objects, so these visual elements, settled gently upon the surface of the object, present the form in a new aspect. Consequently the PSEUDO not only negates the manipulated existence but affirms it as well, exposing its complexity and structural richness. Finally the PSEUDO cannot be interpreted as a unidirectional attitude. With the dialectical unity of affirmation and negation on the one hand it points into the world but on the other hand it also reverts into itself PSEUDO is not philosophy or history but what in the very moment of its birth it was — sculpture. The PSEUDO will exist as long as appearance will be a real factor and mutually.

The manifest of the first exhibition, Budapest October 1970

PSEUDO: SPURIOUS! PSEUDO: COUNTERFEIT! PSEUDO: UNREAL!
PSEUDO: SEEMS TO BE REAL! DOUBTFULLNESS IS OVER!
BECOME FAMILIAR WITH PSEUDO and You will never get embarrassed again in a company
of erudite people, sine the PSEUDO is the lifestyle of the modem human, and the secret of
aplomb! YOU ARE INCONCEIVABLE WITHOUT PSEUDO!
With the assistance of PSEUDO you might get insight into the deepest problems of our age
smoothly. PSEUDO IS AN ART VIEW! Do not believe the MINIMAL-ART!

THE PSEUDO which derives from the collision of real elements and which sees the conflict will easily convince you that you cannot be sure about this. Since, if you believe or not, THE PSEUDO IS NOT WHAT IT SEEMS AS IT'S REAL FORM.

Do not buy from OP ART company either! It is a hip drug factory!
IF YOU ARE MANIPULATED, THEN YOU SHOULD COUNTERMANIPULATE!

DO NOT HESITATE! BELIEVE THE PSEUDO, SINCE PSEUDO IS YOUR FRIEND. By the favor of the
PSEUDO you might get to know that everything that are being sold to you is only a device for
the economic and ideological manipulation of the all-time authority. You can be a peasant, an
engineer, clerk or a technician, might live in any part of society will have to be aware of the fact
that: THE PSEUDO GENRE MEANS THE MANIPULATION OF ARTWORK.
BEING MANIPULATED IS THE GENERAL ESSENCE OF ART! THE EGSISTENTIAL
MANIPULATION OF ART IS THE SYMBOL OF THE GENERAL MANIPULATION OF LIFE!

Please allow three questions for me, and You will find the PSEUDO as the right answer for these!
IS THE ARTWORK, WHICH IS MANIPUALTED, STILL AN ARTWORK?
IS THE ART, WHICH CREATES UNTRUE VALUES, STILL REMAINS ART?
WHAT LIFE IS THAT DOES NOT CREATE ART?
Do not ruminate! PSEUDO will arrange it instead of You! THE MANIPUALTED ARTWORK IS INDEED AN ARTWORK IF IT                          ADMITS THAT IT IS PSEUDO! THE ART WHICH CREATES MANIPULATED WORKS IS INDEED ART, IF IT ADMITS ITS PSEUDO                  GENRE! THE LIFE THAT CREATES PSEUDO ART CAN BE STILL RESCUED!
I dedicate PSEUDO phenomenons on every Tuesday,

The Statue of the Shroud of Turin - by Gyula Pauer of László Beke - Tamás St. Auby - Ilona Farkas

The word "pseudo" means false, or unreal. This is the label Gyula Pauer gave to the sculptural technique that he developed around 1969-1970. The flat surfaces of his Minimal Art works - such as blocks and half spheres - were made to appear wrinkled or bumpy. When we examine these works more closely we realize that we have been deceived, but we still think the three-dimensional appearance of his work was achieved through photographic techniques. Whereas, the method actually used is very closely related to painting.

Pauer's early pseudo works were made in the following way. He would crumple up a piece of paper, or simply fit it into some negative form, and then spray-paint it from the side. (Instead of paper, he would at times utilize other materials, such as pliable, thin sheets of tin foil.) The spray-paint would only make contact with the protruding surfaces - and that remained to be done after this was to flatten out the material onceagain.

It's clear that this method gives rise to a false sense of space. Within this space,shadows vary according to the amount of paint used and according to the anglebetween the paint-gun and the surface being painted. Thus, Pauer's technique is thesymmetrical equivalent of the shadow created by a ray of light. It is interesting, toobserve that when light is projected onto a pseudo surface, our eyes will percieve theform as negative or as positive, depending on whether the light comes from the left orfrom the right.

With this method, Pauer was able to conquer the "no-man's-land" that lies at the spotwhere sculpture, painting and photography meet. This is the space where during theearly 1970's many different artistic orientations came to interact. In his later works, Pauer extended what, after all. is an epistemological approach to such other areas as set-designe, public-performances, landscape painting and body imprints. It is the experience gathered from this last that has been incorporated into the creation of The Statue of the Shroud of Turin. Here the spectator is confronted by the question:

In what manner does the "pseudo" join with a phenomenon which, for multitudes of the faithful, is simply the most factual - transcendent - impression of reality?

Gyula Pauer's sculpture, entitled "The Statue of the Shroud of Turin" represents the central figure of human history, the spirit, the God. Matter, form and light constitute its three essential ingredients. Matter: elements, compounds or mixtures. Form: it imitates, copies, mimics, reproduces an original visible form. Light: both natural and artificial. These three ingredients combine to form an object based on the markings appearing on the shroud of Turin. And this object, upon receiving its function, immediately organizes itself into a statue.

When this object, which looks similar to a shroud covering a dead man's body, is raised up to stand on the part of the shroud that enfolds the stretched-out feet, - when, in other words, it is stood on its toes, new meaning emerge, and the object is transformed into a statue.

The function unfolds in the following schematic sequence:

This series of reports is both accelerated and enriched by externally gathered informations and references:

This stream of ideas in our consciousness emerges from the mere fabrication of this sculpture, from its mere existence. Due to the contemplative, indeed, the meditative character of these ideas, the statue does not even require visual observation. It documents and intensifies a starting point - focuses the human spirit (oscillating between is and is not) on the Spirit of Christ (oscillating between God and man) - fulfils its function - and in the inner light of this mental process, it disappears. Surpassing its own purpose, it serves Salvation: - glorifying the Way, the Truth and the Life.

The statue of the Shroud realized by the Hungarian sculptor Gyula Pauer was given to the Pope, who accepted it with joy. It was delivered by the author himself and by the mayor of Budapest to the Apostolic Delegate to the Hungarian State, His Excellency Mons. Angelo Acerbi on October 15,1991, during a solemn ceremony at which the representatives of the newspapers, of the Hungarian Radio and Television were present. It has also been realized a nice brochure with texts in Hungarian, French and English.

Transferred in Italy, the statue, before the delivery to the Vatican, was shown at the Hungary Academy in Rome. Now it is kept in the Vatican Museums, ethnographic section, and it is part of the collection of the gifts received by the Holy Father.

The author of the work received a letter from the Pope of special thanks and enormous appreciation for his valuable and extraordinary artistic work, with a benediction and the wish to continue this precious way in which the roots of the renewed Christian faith of the Hungarian people are perceived too. This statue is a tangible sign of the fact that also in Hungary the interest for the Shroud is more and more on the increase. 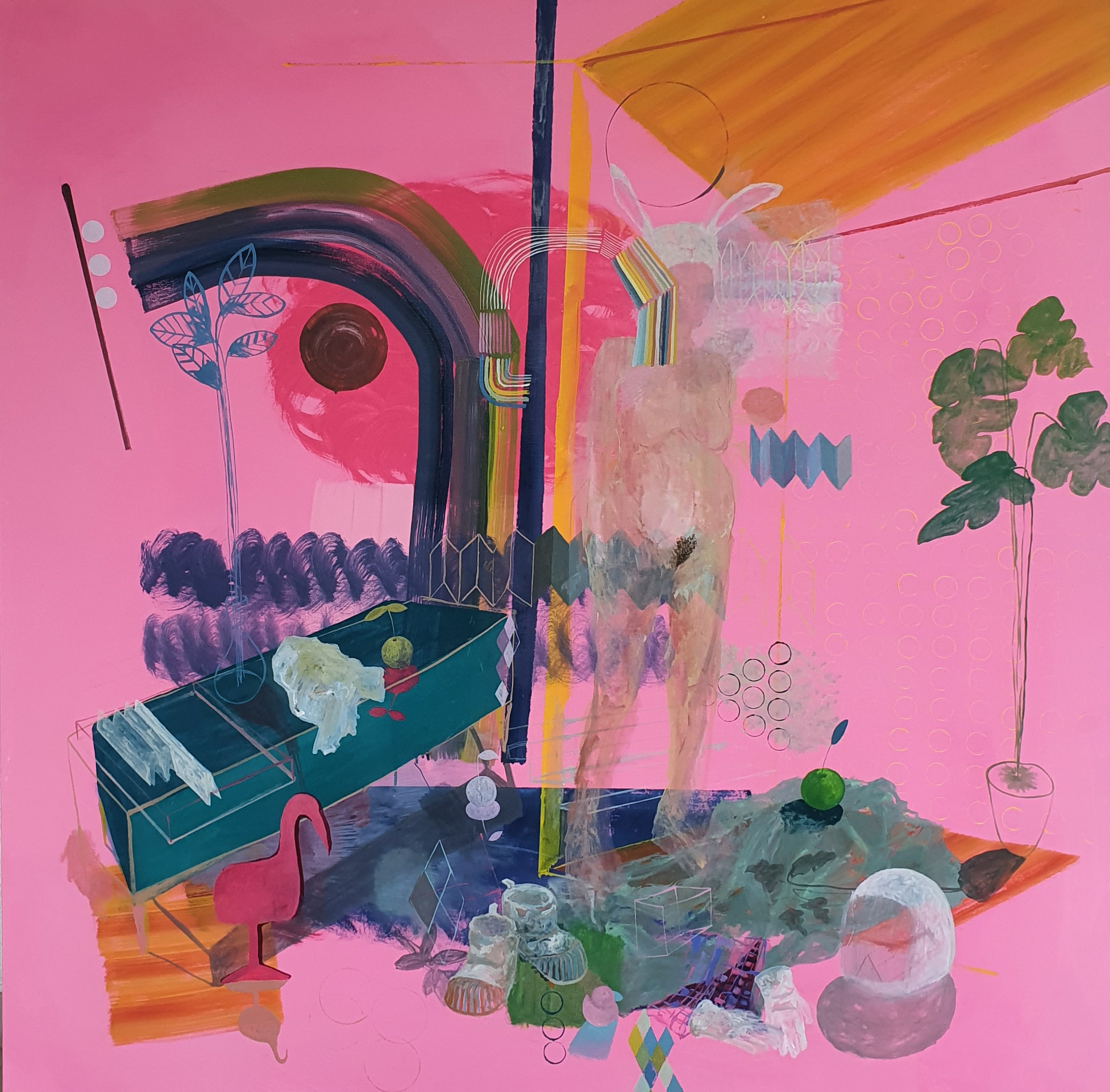